Beam + Takes You There

On a typical weekday morning, Victor Cho can turn on his Beam+ and experience breakfast time with his children while he’s hundreds of miles away.

Cho, the CEO of Evite, uses the controls on his computer at his Los Angeles office to move the Beam+ around his family’s kitchen in Northern California. He enjoys casual conversations with his two daughters, aged 8 and 6. He can drive the Beam+ using computer keyboard controls and dual cameras for front and floor views that provide peripheral vision to make him feel he’s in the room. He can look at what the children are doing and they can see his face on the screen. “It’s being there at the same time, paying attention to that person, and looking at that person,” he says. 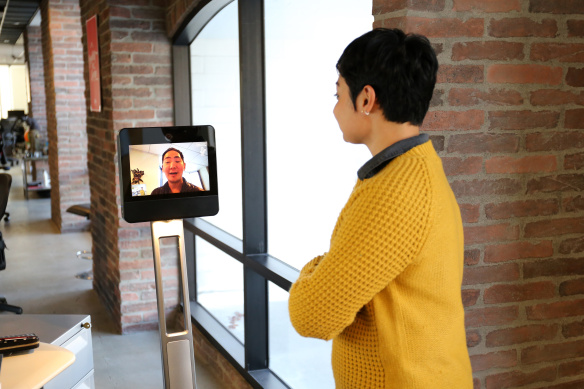 The girls have made it a natural part of their morning interaction with him. “I will walk them out the door and say bye to them, wishing them a good day at school,” Cho says, laughing. After school, or at evening play time, he can be doing work nearby while the kids play with Lego blocks.

For Cho, the Beam+ has made a significant, positive difference in his quality of life since he installed it this past summer. But that is just one way Cho benefits. Like many business people working in a global economy, his life happens in multiple places. With the Beam+, he also makes his presence felt among colleagues at Evite’s satellite offices in Chicago and New York. Employees of the growing online invitation and social planning company have also improved the quality of their remote interactions. While they once felt distant and removed, they now feel like they’re practically in the same space.

What’s clear is that once Cho starting using the Beam+, he started to see more ways to take advantage of what it offers. It’s the same kind of experience for other Beam+ owners, like Steve Simons and John O’Mullane. Even though all three executives are leaders in very different organizations, they each find a growing number of reasons to power up their Beam+ and BeamPro devices.

A Close-Up View for Product Demos

At his workshop in Mountain View, Calif., Steve Simons has developed a product that automates the work of precision milling machines that make metal parts. Instead of having a person manually feeding and cleaning materials, Simons Design Innovation has launched the Smart Valet, a material loading platform that is “like a bar feeder for your mill.” The goal: keep more machine shop jobs in the U.S. by making American plants more cost effective.

For prospective customers, it is important to see the Smart Valet in action. A YouTube video is fine to entice more interest. A trade show display is good, but often rushed, Simons says. What really works is inviting customers to drive a Beam+ around the workshop area where a Smart Valet is operating. That way, Simons says, the customer can see what he wants, when he wants, and can ask questions about what is in view.

“Typically we can send them a video. But we can develop a lot more interest if they can see the device run in person and see all the features and ask questions,” Simons says. “Once they start looking and asking questions, we have a pretty good conversation with them over using the Beam.”

This interaction saves both Simons’ company and the prospective customer from traveling during preliminary conversations and has shortened the sales process in some cases. “It has made the difference in at least the timing of the sale. We got the customer’s attention and we were able to explain why this is going to help them make money. I don’t think we would have been able to do it without the use of the Beam,” Simons says. The video and sound quality (the Beam+ uses a microphone array that cancels out the ambient noise in the machine shop) makes it easy to see the action and hear people talking in the workshop.

The company also uses its Beam+ to monitor product tests during off hours. Simons or one of his colleagues can check the status of a Smart Valet test run. In one instance, Simons noticed that someone had not flipped a switch required for the machine to do a proper test. Simons drove back to the workshop to fix the problem.

When one of Simons’ business partners saw the Beam+ at the workshop, he brought it back with him to Taiwan (which meant Simons acquired another Beam+ for the Mountain View workshop). Now, Simons says, he can attend meetings and check in with colleagues at Intersource Partners in Taichung, Taiwan, a supply chain management company that performs quality control inspections on final products before they ship.

And just like the Smart Valet product demos, Intersource Partners can invite customers to use the Beam+ in Taichung to tour the office, attend product quality inspections and watch the results and ask questions. “I will go to a customer site, jump on the Beam in Taiwan and run it through the facility and show him what we are doing there and what the plant looks like. And along the way, have meetings with different officers in the company,” Simons says.

He can also guide the Beam+ from his office in Mountain View, with a customer along for the ride. “To me, the groundbreaking aspect of having the Beam in Taiwan is the mobility,” Simons says. “It allows something like a water cooler conversation to happen. Being able to run it around, and interact with anybody on-site is something I didn’t expect in terms of the results,” he adds.

At Bayer, a Chance to Be Present and Counted

John O’Mullane serves as head of innovation, research and development at Bayer Consumer Health, a Division of Bayer, the global life sciences company. From his office in Basel, Switzerland, he communicates with a diverse array of colleagues – from research scientists to customer experience designers – all over the world. As he began this summer to use BeamPro to visit with working groups in Memphis, Tennessee, he says he quickly saw its potential to bring people closer together even when they were separated by oceans or continents.

O’Mullane has a BeamPro at his company and a Beam+ at home. He says the difference between the Beam telepresence devices and other communications media is the difference between a passive bystander and an active participant. With the Beam, a user can feel more present by controlling his frame of attention. He can turn to react or see something that interests him. He can focus on what he thinks is important, rather than relying on a static camera or a conversation partner’s video camera position.

“Even in a video teleconference, you are kind of stuck in a room,” O’Mullane says. “If you were using your iPad and FaceTime, it’s not the same experience. You are kind of being led, and being taken someplace else. With the Beam, there is a kind of presence to it. We prefer to use it rather than any other way of communicating because it is so dynamic,” he adds.

So far, Bayer has just begun to use its BeamPro in meetings in Memphis. It is doing pilot tests with colleagues at a facility in China. But O’Mullane sees more possibilities than meetings and drive-by interactions. For example, he imagines attending brainstorming sessions at a consumer engagement center in Memphis, a facility with lots of open spaces and clusters of people working in small groups. There, a user could participate in a group discussion via the BeamPro and move from group to group through the facility.

Factory and lab tours are another potential application. O’Mullane foresees testing a BeamPro in a clean environment where people have to wear gowns and glasses. Bayer could also use the device to accompany a laboratory site auditor, or to visit with researchers to learn more about their latest work. Or to consult with colleagues in China or other locations that can benefit from expertise from headquarters or another site; to share knowledge via BeamPro rather than traveling would save both time and expense.

Shortly after Bayer gained experience with the BeamPro in its offices, O’Mullane bought a Beam+ for his home in New Jersey, where his wife spends time in addition to being in Basel. The experience of spending time together with her via the Beam+ has made a difference. “You want that time together and on the telephone is tough. You miss all the body language,” he says. The great thing about the Beam+, he says, is “I can walk around the kitchen as my wife prepares dinner. And she can carry on preparing dinner. And when she is answering a letter, or opening the mail, or doing the dishwasher, I am wandering around the kitchen as well,” he says. “She can do her stuff, just as you would if you were there. Very rarely in today’s busy world, can you just have time to sit down, and have that time together and to have it be productive, for both. It is something that is rare.”

At Evite, a Welcome from the CEO

Evite CEO Victor Cho wants to create a vibrant culture that engages employees, whether they are in the Los Angeles, Chicago or New York office. Cho says the Beam+ helps him achieve that by allowing him to spend time with groups in each location, where he can have informal conversations. “If I have a chunk of downtime, one of the first things I will roll through my head is if there is someone or something interesting I can see. Usually there’s a task I can do, or I can just roam the hall and say hi to people,” he says. “I feel more connected to the offices.”

For example, he has driven the Beam+ in the New York office to say hello to a new employee and has dropped in on a Thanksgiving potluck lunch at headquarters when he was working from home one day.

And he has encouraged his colleagues to use the Beam+ to connect with each other, especially for one-on-one or small group conversations. “It’s a great employee motivator. People think it’s cool,” Cho says. “And it puts us at the progressive edge of how we think about employee interaction and the use of technology,” he adds.

Cho says his company has video conferencing capability, but he prefers to use the Beam+ when he can. “The amazing thing is that it’s just like I’m there in person. It’s more personal. The conversation is more natural. I can pop in and we can brainstorm. It lends itself to a more casual discussion,” he says. He figures the Beam+ paid for itself when it saved him one cross-country trip to visit a remote office. And then there’s the Beam+ he has at home.

“When it came in the first week, I had two or three nights with my family. Those hours are priceless,” Cho says. “As long as I am doing any business travel, I will be getting the next version. It is that transformative.”