Oliver Stone’s eagerly anticipated film, Snowden, opens in the U.S. on September 16, and BeamPro® is thrilled to make its box office debut in the movie.

Critics are already hailing the film from the legendary director as one of the year’s best… and perhaps one of Stone’s most prominent works:

“Snowden” isn’t just the director’s most exciting work since Nixon (1995) — it’s the most important and galvanizing political drama by an American filmmaker in years.” – Owen Gleiberman, Variety

“… Possibly the most important film you will see this year. It should certainly be compulsory viewing for anyone with even a passing interest in the basic norms of human rights, freedom of speech and civil liberties.” – Chris Newbould, The National

THE HUMAN TOUCH
While it’s difficult to bring a film that’s essentially about data and technology to life in a compelling, thrilling way, it’s the nuances of the human condition that Stone masterfully illuminates in all of his films – and Snowden in particular – that makes the stories he tells universally relatable:

“Snowden is also a remarkably optimistic movie, another characteristic of Oliver Stone at his very best. A bleaker beat might have made the picture more artistically interesting, but Snowden’s biography is ultimately a story about hope and change, and Snowden generously embraces that narrative theme.” – Jared Petty, IGN

THE BEAM CONNECTION
Prominent personalities from Edward Snowden to Kanye West and President Obama use Beam to connect, communicate and be present in important situations and conversations, all around the world. While video conferencing is part of our daily experience, Beam allows you to hear and see everyone and everything in the room… and for others to interact with you just as if you were physically standing right next to them.

We are honored to be in the room when it comes to helping thought leaders, artists and everyday people show up in ways never before possible.

NO SPOILERS BUT…
While we won’t give you any specifics about Beam’s appearance in Snowden (you’ll have to go see for yourself!), here’s a little hint from Pete Hammond of Deadline Hollywood.

“Snowden is participating not only in its publicity with interviews from Moscow, but he’s in the film as well in a nifty little cameo at the end.”

We’ll take that as a glowing review!

For more about Beam and to see it in action, check out Snowden’s 2014 TED Talk and New York Magazine’s recent piece, “I, Snowbot.” 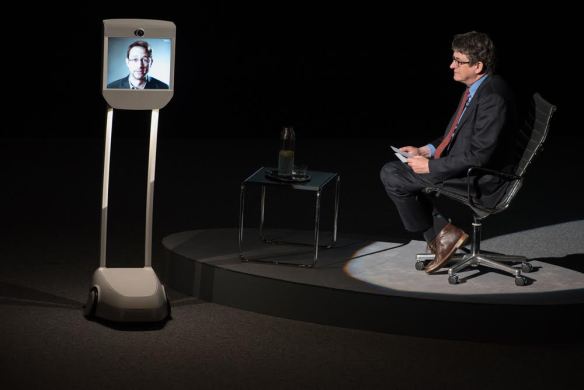