Greg Samuels is owner and CEO of Richmond, VA-based IT consulting firm, Solvaria. Being on-site at his clients’ organizations for face-to-face meetings is an important part of his business, but doing so on a regular basis ranged from being costly and time-consuming to physically impossible when his consultants and he were literally needed in two places at once. Enter, Beam: Greg bought one on Amazon to test at a client site; the results were so positive that today he has added two more to his growing fleet of Beams to place with clients, and another that stays in-house at Solvaria’s headquarters. We were thrilled to chat with Greg about how Beam has transformed his business, the value of impromptu conversation, and why Bob the Builder is actually better off as a bot.

Q: Tell us a bit about Solvaria -- what does your company do, and how did you start considering telepresence?

A: Solvaria provides CIO services to a variety of businesses, from mid-market through larger enterprises, on a part time or fractional basis. We’re based in Richmond, VA and have clients all over the state, and also nationally, so originally we used Skype to interface with customers. And while Skype and other video conferencing technology is good and useful in its own right, it’s only available in a conference room and isn’t mobile. Plus your IT people often have to jump in to set it up, load the software, troubleshoot, and so on.

I started talking with colleagues about how great it would be to have the ability to move around and have impromptu conversations with our customers. A cousin of mine on the West Coast then mentioned how he used telepresence technology to cut down on travel time and be more connected with his customers. We now rely on it on a daily basis.

Q: What led you to try out Beam?

A: It’s perfect for a consulting business. Being seen “on-site” on a regular or daily basis demonstrates the work you're putting in. Otherwise, there seems to be an out of sight, out of mind element where clients think, “Gosh I didn’t see you here today, so you’re not working for me” -- even if you are. With Beam you’re being seen, even if you’re not physically there.

I started doing some research and saw favorable press and videos online, so I decided to buy a Beam for a pilot test. I placed it at my client’s office on the other side of town and started tracking how that went for 30 days. At the end of that period, I sent a survey to all the users and got feedback like, “I feel Greg is here everyday,” and “I don’t need to know about the tech he’s using to talk to him.” It was a hit.

Q: How has your Beam use evolved since you got that first unit?

A: We have 30 total employees, and most either work from home or at a client site. So there’s usually only a handful of people in our main office at a given time; five at the most. After our first pilot test, we bought a second one for another client, and now we have three total at client sites. We’ll soon have a fourth one in our corporate office so employees can Beam In and participate in events when they’re not able to be there in person.

Q: How did your clients react when they first encountered you on the Beam?

A: There’s always a humorous response to start out with, but once the novelty wears off and the usefulness comes in, you get down to business and the comedic relief goes away. One time I was asked to be in an audit for a client doing a security overview, so I Beamed into a conference room with 40 employees. Of course the novelty factor was there, and the speaker was making side comments during the meeting, and it was all lighthearted and fun.

But then afterward the speaker told me she was really happy I was there in the meeting, and I was glad to be there to provide value to my client. I was able to stick around after the meeting was over and talk through a few details, something that would’ve been harder to do when just conferencing in on phone or Skype.

Q: Do your Beams have special names?

A: Typically it’s the name of the person Beaming in, for example, I’m “GregBot.” We also get a fair amounts of “Sheldon” in honor of the character from The Big Bang Theory.

Q: Can you qualify or even quantify the impact Beam has had on your business relationship with your clients? What are the top benefits of using Beam for remote work?

A: It’s really strengthened our business relationships. The fractional model is 10-20 hours a week, and my consultants would normally have to travel to meet face-to-face with clients -- so Beam provides us with dollar and time savings on all of the hotels, transportation, meals, and so on. From the client point of view, they are still getting full value out of knowledge, expertise, and ability to have an impromptu conversation with my consultants and me without the expenses normally associated with this business model. The savings are exponential.

Q: If you could make any changes to the Beam, what would it be and why?

A: One of the biggest things we have found useful is the ability to adjust video quality to use less bandwidth. Recently, I had a day-long meeting, so I dropped down my resolution on the video feed to medium and that was a tremendous help in keeping me connected for a longer period of time.

One natural limitation with telepresence is multi-floor offices or a client whose office has multiple doors -- in those cases someone there escorts the Beam into various rooms or into an elevator. Two out of our three biggest clients have open spaces on a single floor, so it’s not much of an issue for us overall.

A: Our client in Northern Virginia has a manufacturing plant, so the first time they powered up their Beam they put a hard hat, tie, and smiley face on it and called it, “Bob-bot.” That was pretty funny. Another time I was walking with the COO of a company, and their Wifi went south, so he had to drag my carcass back to the docking station. He had a good sense of humor about it; when he asked “Where’d you go?” I told him it was all his Wifi’s fault, not my bot’s. In both situations, we’ve seen tremendous value in the increased interactions it allows us to have with our clients.

Q: Any insider tips or advice about using your Beam?

A: It’s hard not to accidentally sneak up on people because of how quiet it is. I’ve unintentionally scared a few people by rolling up to them when they weren’t expecting it. So be sure to announce yourself; for example, I say “knock knock” before I head into someone’s cubicle.

Because Beams are intended to give you a physical presence wherever you need to be, but aren’t presentation tools, we use two laptops for when we need to share screens or present something remotely: one to drive the Beam and the other to share a screen or slides on the other end.

As for advice, I encourage customers to use it in a variety of ways. We have a client who has remote employees, so they have multiple people able to Beam into the device. Still, people have to remember that Beam is useful for conversations and not for surveillance. It’s great to be part of the office, but it certainly isn’t a management tool; I don’t recommend using it to check on  your team when you don’t have anything specific to talk about. It’s not meant to be “Big Brother.”

Q: If you could Beam In anywhere, where would you go?

A: Professionally I would like to take a Beam and drop it at any conference I would like to attend. I have to be at a conference in DC later this month that’s a week long -- I’d love to have a Beam there without having to leave Richmond.

Personally, I think being able to Beam In at multiple cultural destinations across the world, like the Louvre in Paris, would be great. Looking at thousands of pieces of art without leaving my house would be interesting and entertaining to do. I noticed Beam is already in a few museums like the de Young in San Francisco, so that’s really cool.

Q: You mention in your post you’re buying a couple more Beams. Any other plans to grow your fleet?

A: As the Beam becomes more popular, it's clear to me that our clients will invest in more Beams. For example, after seeing how we use it, we have a client talking about buying two more Beams with extended battery for all-day planning sessions. Also, one of my Beams sits in the office of an anesthesiology client. This gave him the idea that a Beam would be great for pre-op rounds in his healthcare business. So, Solvaria’s Beams are sparking ideas for my customers about how they could better serve their own clients.

For more about Greg’s experience with Beam, check out his blog post, “The Value of Presence vs. Telepresence.”

This interview has been condensed for clarity. 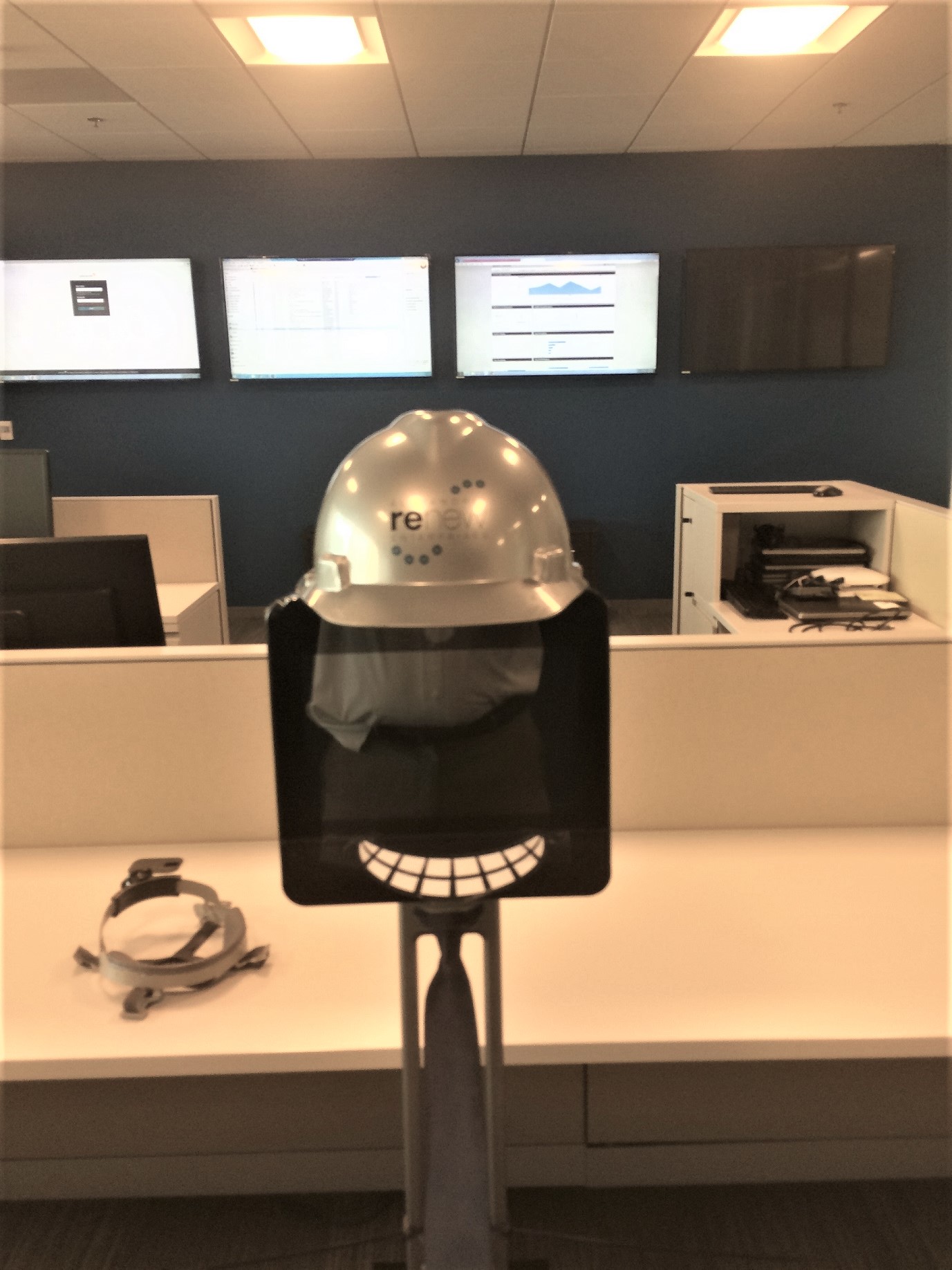