The story of Kay Fegette, who is 81 and lives in Auburn, CA, is a heartwarming story of how families stay connected despite being spread out across the world.

To stay in the same home where she raised her family and live independently is a goal of 90% of people over the age of 65, according to AARP, and one she enjoys thanks to Beam telepresence technology.

Her son Scott Fegette, who lives in Carpinteria, CA, checks in on her regularly to see how she is doing and say hello. As featured on Sacramento’s FOX 40, Scott uses a Beam she dubbed, “Benny,” to frequently drop-in. Other family members, including her other son from Italy, show up and sit in the living room for a visit regularly as well.

Kay first learned about Beam when visiting her cousin in Minnesota at The Learning Lab by Augustana Care. This forward-thinking organization, which caters to older generations and “helps residents live the lives that most inspire them,” included the telepresence device in their demonstrations of technology that can support improved quality of life for seniors.

What her son Scott appreciates is that Kay doesn’t have to do anything on her end for Scott to connect with her. Unlike a phone or video call, where someone has to take an action to answer, Scott enjoys Beaming in and “wandering around the house a bit,” to find his mom and say hello.

Going Home - Autonomously and with Ease

Scott, Kay’s son, was initially skeptical at first, admitting, “The idea of driving a robot around the house seemed far fetched. But the experience was really, really smooth. I never felt like there was a point in time where I had to hunt around or look for a manual. It was really intuitive to sort of navigate around with the arrow keys on my keyboard. It was actually really easy to use, too.”

Scott also notes that the latency with Beam is perfect, despite the fact that his mom’s Wifi isn’t always the strongest. And as a remote car aficionado who’s used to maneuvering remote devices and getting stuck in narrow places, he marvels at how “surprisingly resilient” Beam is when it comes to  getting over little bumps and in navigating carpet and different types of floors.

Both agree that when Scott Beams in, it’s the same feeling as having an in-person visit.

Checking In On Your Loved Ones

While checking in on her is a primary focus, Scott enjoys the added benefit of feeling like he’s at home, just sitting in the living room where he has so many happy memories. In fact, Scott admits to Beaming into his childhood home as he sips his morning coffee to simply to enjoy the view out the back window that overlooks mom’s beautiful garden.

These old-fashioned drop-ins are so common with the Fegette family that Kay has taken to leaving messages for her kids on whiteboards when she’s out of the house to work on her garden or run errands in town. 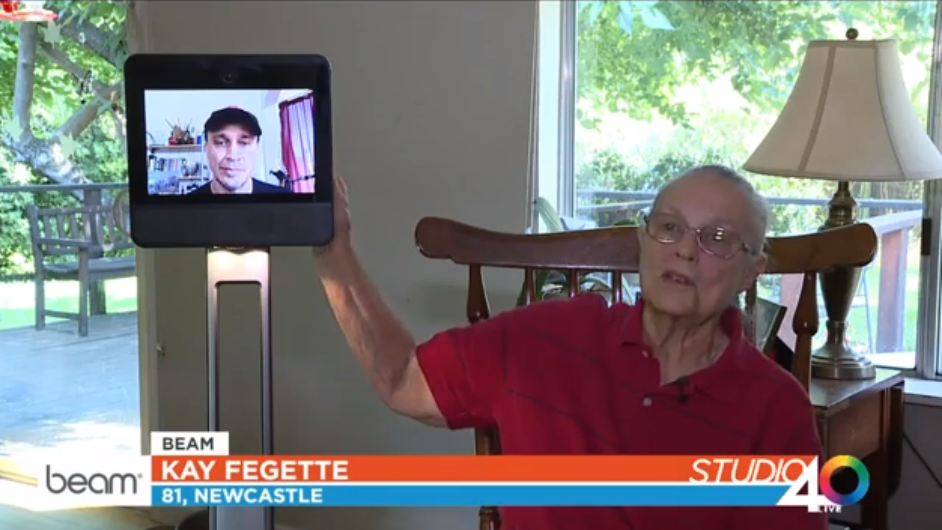 Telepresence technology may be relatively young, but the benefits for our aging population - and the younger generation who loves them - are clear. Like Kay’s abundant garden, that constant, consistent attention helps remote relationships continue to grow and flourish.